A crosscurrency among genres, a resonant energy emerging from disparate media, is a felicitous occurrence, and rare. Complementary juxtapositions can bring forward resonant textures and undercurrents in works by different artists that, though they are expressed in highly individual figurations, seem to wrestle with similar concerns. So it can be seen with this pairing of the abstract paintings of Pat Adams and the weavings of Bhakti Ziek.

Spending time among the mixed-media paintings of Pat Adams (of oil paint, grit, shell, paper, foil) and the recent textiles of master weaver Bhakti Ziek (hand-painted silk threads, wool, cotton, textured yarns, digitally manipulated photography), one witnesses the similarity of abstract shaping and the layering of language, color, and texture. Their large and small worlds are intricately detailed and concretely physical, defining metaphysical and emotional landscapes of powerful clarity and accomplishment. Look for it in the frisson created by the proximity of the painted elemental shapes invoked by Adams, or those seeming to appear on Ziek's complex woven surfaces. They each hold firm to their deftly claimed and formed spaces, yet indicate as well the larger design and movement at work. We are taken with the intuitive exactness and precision of thought, with its communication of a specific lexicon for entering the contours of the work at hand, and for evoking a larger context from its coherency.

Works selected for this exhibition by Pat Adams date from 1977 to 2010. She has been a significant influence in abstract art for half a century, exhibiting exclusively with the New York gallerist Virginia Zabriskie since 1954. In his Jan. 13, 2005, New York Sun review of Zabriskie's 2004 restrospective of Adams' career, Pat Adams: Paintings: 1954-2004, Lance Esplund says succinctly of the artist: "She is not a romantic. Nor is she a cold formalist. But she is interested in getting at the root – the genesis – of emotion...." Donald Kuspit, writing about Adams for ARTFORUM in Sept., 1992, says simply, "Pat Adams' abstract paintings symbolize and explore intimacy...[her forms] are in effect figures in intense emotional relation."

Bhakti Ziek is showing all recent pieces in this exhibition. She is internationally known for her work, which ranges in technique and execution from backstrap weaving to digital jacquard. She is the co-author, with Alice Schlein, of The Woven Pixel: Designing for Jacquard and Dobby Using Photoshop," the definitive book on contemporary digital design for textile. Her weavings have been widely exhibited and collected, and are included in the permanent collection of the Museum of Arts and Design in New York City. Ziek is a recent recipient of a creation grant from the Vermont Arts Council. 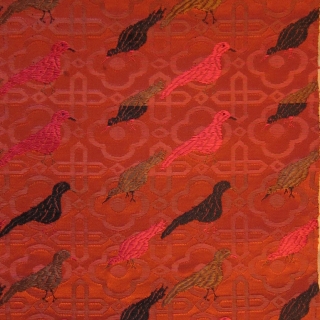