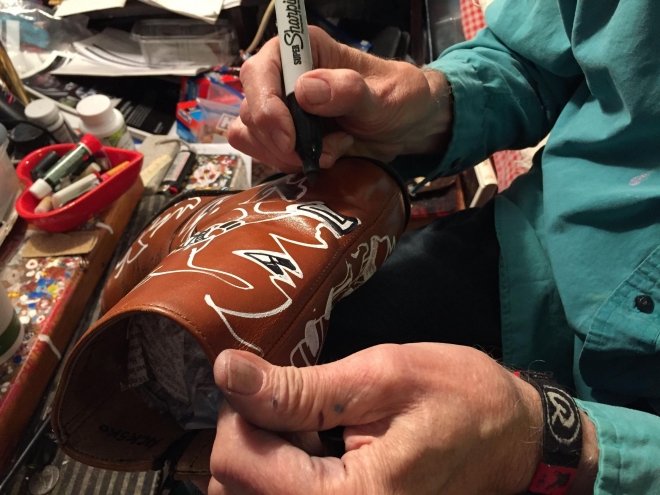 Walking into BigTown Gallery, Vergennes, don’t trip on the shoes; they are all over the floor. The high narrow space looks like a giant’s closet, albeit a very tall giant with normal-size feet, who loves shoes, but not just any shoe—very colorful ones covered in meticulous patterns, or big splotches of color, or swirly psychedelic strokes. A neat giant, too, the shoes and boots being laid out in regular rows, in pairs, in a quiet, orderly conversation, a conversation I want to be part of. What are these giant’s shoes saying to one another, to me, to the giant?

Ah, you must see for yourself and listen to your own conversation with the shoes. Varujan Boghosian stopped by during the opening last weekend of Rick Skogsberg’s new show in Vergennes, “Can’t Lose Shoes.” As he gazed at Rick’s painted shoes, Varujan said, “It’s like an explosion! The range of his imagination—it’s endless. Rick has a quality many artists don’t have, a fertile imagination. As soon as one shoe seems to say it all, you look at the next one, and it says something new.”

No, the lined-up shoes are not a shoe-dream, not a shoe-fantasy, where all the shoes you’ve ever owned or coveted end up carefully arranged in your walk-in closet; these are Rick Skogsberg’s painted shoes that can’t lose, that are unbeatable.

Rick started painting these crazy, wild, gorgeous shoes because, well, shoes lie around and are available to be painted on. Or maybe the idea of painting shoes started a long time ago when Rick decorated envelopes in which he sent letters to his friends (remember those days?), or maybe the concept started even longer ago with Rick’s grandfather who painted pictures of barns and trees, and passed down the urge to draw to Rick, Rochester resident, poet, and insomniac, who often finds himself drawing at 3:00 a.m., perched on a low slung couch, all his tools within arm’s reach, happy, exhilarated, doing what he loves best.

Rick paints plates, too. Covering both sides with intricate and intriguing figures and designs, characters and poetry, Rick creates a plate-dialog, the two sides with each other, a two-sided he-and-she, it-and-them, give-and-take.

So much of Rick’s work is a dialog, Rick with his emerging piece, Rick’s piece with itself, the viewer with the work. As he begins to paint, Rick reacts to the forms he’s creating, letting the shapes and patterns indictate what he does next. The design is also shaped by the shoe, by the original designer’s conception. And once the painting is finished, the shoe becomes more than a shoe—a message almost, an expression of thought, mood, emotion—from designer to artist to wearer—a shoe that transmits mysterious signals that surprise, please, pique—a myriad of responses particular to that artist, shoe, and owner.

Rick loves the idea of people wearing his shoes, and he likes putting his work before people, having his art seen, taken in, questioned, and interacted with. “When people lay their eyes on the shoes,” Rick says, “when I show them to the bank teller or the postmistress, that establishes who I am.” Rick deeply appreciates the opportunity “to do what I set out to do, to create art that is authentic to who I am, to be good at being me.”

If you do buy a pair of Rick’s shoes, love them, wear them, break them down, make them your own. Then admire them, make a shoe-shrine, and bow. Because when you bow, you’ll see your feet, the most important part of your body. Your feet deserve a thing of stunning artistry.

I suppose you want to know what the shoes say to me, what the shoes say through the giant, whispering quietly: “red shoes, blue suede, a glass slipper, elves, ‘We like March -  his Shoes are Purple - ’ (Emily Dickinson), the old woman with so many children.” Not just the giant, but so many folks talking about shoes, about souls as well as soles. Did you think there was nothing more to say about shoes? Visit BigTown in Vergennes—Rick will show you a new way.